Unlike me, Robert doesn’t always have a lot to say.  Sometimes our conversations are more one-sided with me talking and him listening.

That’s usually the way it is when the topic of “feelings” arises.

Occasionally I just like to say to him, “Let’s talk about our feelings”. And he usually responds with, “I don’t even know what that means.”  Actually, I’m not sure I do either, but it’s fun to tease him. 🙂

When we were first dating, Robert wrote me a sweet note telling me of things in his heart that were easier for him to write down than say aloud.  Honestly, written words may even be better than spoken ones.  I can save those and read them over and over.

Often, he tells me what he’s feeling with his actions, and after more than two decades of marriage, I have learned to hear what he’s saying, even if he’s not speaking.

When he makes popcorn for me or brings home chocolate to me, he’s saying I like to make you happy.

When he plans dates for us, he’s saying I like to spend time with you.

When he surprises me and does the grocery shopping, he’s saying I like to help you.

When he looks at me this one special way, he’s saying I think you’re beautiful.

When he makes plans for my birthday, takes care of me when I’m unwell, lets me keep just one more kitten, comforts me when I’m hurting, and holds me close, he’s saying I love you.

And that’s just what I want to hear.

Have you liked and followed us on facebook?  We hope you will!  Find us here: https://www.facebook.com/wonwithoutwords/ 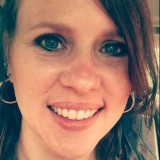 My name is Denise, and I am a wife, a mother, a sister, a daughter, an aunt, and a child of God. I think of myself as one of His works-in-progress. My husband, Robert, and I have been married for 23 years and we are the parents of a son and two daughters.